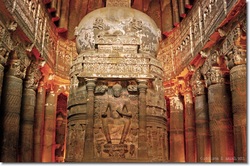 Indian architecture is very old and beautiful just like its civilization. From what remains, the most distinguished are the temples, Chaityas, Viharas, Stupas and other religious structures. Chaityas and Viharas were structures created by Buddhist and Jain monks that were cut out of rock, like a sculpture. Chaityas were a place of worship, while Viharas served as the residence for monks. Monks carved inside these structures windows, balconies, and gates in great arc shapes, which resembled very closely wood construction; the only difference was that these structures were more like sculptures than architecture. Many of these structures are found in western India, in places like Karle, Nashik, Bhaja and Kanheri. Another type of this rock-cut architecture is the Rathas at Mahabalipuram. These temples were constructed during the reign of the Pallavas who founded the Dravidian style of temple architecture. The rathas were scaled-down copies of actual temples carved out of monolithic rocks. A stupa was a burial spot that contained a Buddha relic and they were a place of worship. The temples are divided into three different architectural categories: the Nagara or the Northern style, the Dravida or the Southern style and the Vesara or Mixed style. The Northern Indian temples are distinguished by prominent sikharas, which is the rising tower in the temples. In the Southern Indian temples the most prominent features were the temple enclosures and the Gopurams or huge gateways. The Gorupams served as guide into the sacred courtyard. 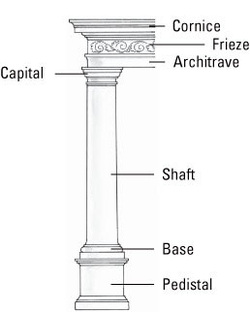 Parts of the column
Greece
Greek architecture was based on a system of proportions that relate small parts of the structure to the whole building. The system was developed according to three different architectural styles or orders that consist of a column that extends from the base at the bottom, to the shaft in the middle, and to the capital at the top. The capital was often decorated with natural representations of animals and plants. Also the capital supported a horizontal component called the entablature, which is divided into three parts: the architrave (bottom), the frieze (middle), and the cornice (top). The orders were first constructed out of wood, and later were replaced with stone using the same process. The oldest and most simple order is the Doric, which consists of a shaft with concave carved curves, a capital with a rounded part at the bottom and square top, most didn’t have a base, and the entablature was decorated with vertical channels and sculpted figures. The next order is called Ionic because it was developed in the Ionian Islands. The Ionic order was used in smaller buildings and interiors and it can be identified by the two scroll-like shapes found in the capital. One of the earliest examples of this order is in the Athena Nike temple in front of the Athens Acropolis. The last order is the most elaborate one since the capital is decorated with sculpted layers of leaves. This order is called the Corinthian after the city where the inventor supposedly invented it in the end of the 5th century B.C.E.
http://www.dummies.com/how-to/content/greek-architecture-doric-ionic-or-corinthian.html 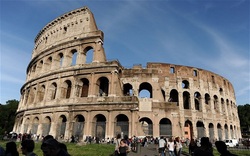 The Colosseum
Roman Empire
The Roman architecture can be divided into two periods, the first when they were a Republic and used a lot of the same ideas from the Greeks and Phoenicians, and the second when they became an Empire and acquired the knowledge and diversity from the other nations they conquered. As the Romans changed from a Republic to an Empire their architecture started to develop and they started to create new buildings and structures, like forums, basilicas, baths, amphitheaters, temples, roads and aqueducts. In the beginning many of their buildings were built out of wood, but then they started using more strong and lasting materials like stone and marble, and also since they had conquered so many people they had more than enough slaves to contribute to the building process. During the 1st century B.C.E. invented concrete which helped them create vaults, arches, and domes by putting concrete into molds. So they could create buildings of great size since the arch could support more weight than other structures. 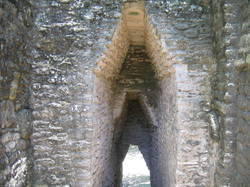 Corbel vault
Mesoamerica
Mesoamerican architecture refers to the building traditions of the cultures found in parts of Mexico and Central America before the Spanish conquest in the 16th century. In these cultures, the construction of pyramid-temples became the sort of popular thing to do. One of the earliest pyramidal structures is found in the center of the Olmec culture at La Venta, and it is a mound of ground and clay about 100 feet high. The pyramids in Mesoamerica were usually heaps of soil faced with stones, and they typically had a sort of platform only for the most privileged individuals of the community. Later when the Mayan architecture started to develop the corbelled vault came into the scene, and also ceremonial centers started to increase in the Maya Lowlands, as well as other monuments. A general element of these sites was tlachtli or ball court, which were often the architectural core of the cities.