While food production did increase, it was not enough to feed China's ever-growing population. Peasant uprisings were occurring more and more frequently. These occurred around the turn of the 19th century. One such rebellion, the White Lotus rebellion, lasted a full eight years until being put down in 1804. The opium mania of the early 19th century caused the first Opium War in 1939, which lasted 3 years and culminated in the Chinese signing of an unfair British treaty and the establishment of Hong Kong as a British base.

After this, with population exploding and poverty increasing, the Taiping rebellion broke out in 1850. Starting here was a horrific decade for China. Rebellions ravaged the country, with another war against Britain and France breaking out in 1858 until 1860. The Qing empire didn't have control of South China, and the emperor's Summer Palace burnt down after the 1858-1860 war. Another "unfair treaty" was signed between China and Britain. In total, by the time the Taiping Rebellion ended in 1864, 20-30 million lives have been lost. China rebuilt (remarkably) successfully.

China had no desire to lose another war and be forced to sign more treaties, but other countries were not very compliant. China lost the war with Japan from 1894-5, and many Eastern ports of China were opened for business with other countries. Hatred of foreigners caused ever deeper hatred of the Qing dynasty. The Boxers arose, killing Western missionaries. This seemed to be supported by the Qing dynasty until Beijing was sacked by an international force sent by Europe. China was also forced to compensate for the foreigners' losses.

Opium. That's what it was all about. The main reason for the huge economic crisis that occurred around the beginning of the 19th century was, besides the already out-of-control population, opium addiction. The Chinese were smuggling it in from Britain. This opium addiction made the Chinese lazy and unmotivated, and people stopped working. Britain was angry at China for imposing severe trade restrictions, and thought they could make a quick buck by exporting illegal goods (i. e., opium) into China. Meanwhile, the huge poverty caused by this caused the Taiping rebellion in 1950.

Confucianism still was prominent at the time, but it was certainly losing its touch (especially as feminists began to speak out). Again, Buddhism rose to the top.

Since the growing population could not be supported by the amount of food being grown, the lifestyles and quality of life in the beginning of the time period were slipping. People stopped showing up to work because of opium addiction, further decreasing the quality of life. Finally, after peasants were sick of the poor life conditions, the Taiping Uprising broke out in 1950. Rebels roamed China at will, and the government was in a state of disarray, which didn't do much to help the problem. Later, after losing even more wars, the Chinese gained an anti-foreigner mentality which contributed to the Boxer Rebellion in the early 20th century.

After the Taiping rebellion, attempts at modernization were made, especially in regards to armed forces. China had lost two wars to Britain, and they did not want to lose another. However, it was for naught, as they lost another war with Japan at the end of the 19th century. For most, this invoked a deep hatred of all Westerners. The Qing dynasty also tried to modernize more at the beginning of the 20th century, but it was too late to do much good.

What is positively the most prominent art work in East Asia in this period is Hokusai's The Great Wave at Kanagawa. It is a wood-block print that is commonly referenced in both popular culture and professional culture. 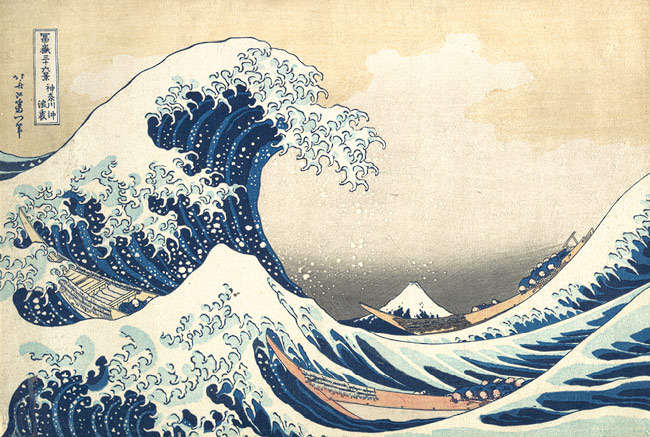 The rebellions caused by discontent with the Qing Dynasty caused continual shrinkage of the empire, as seen below.
"Katsushika Hokusai: The Great Wave at Kanagawa (from a Series of Thirty-Six Views of Mount Fuji)" (JP1847) In Heilbrunn Timeline of Art History . New York: The Metropolitan Museum of Art, 2000–. http://www.metmuseum.org/toah/works-of-art/JP1847. (October 2006)