Panoramic view of Persepolis
Persepolis is a the name of the ancient city of Parsa.  The name of the city literally meant City of Persians.  The construction of this city began in 518 BCE under the rule of King Darius the Great.  During his rule, he made Parsa, or Persepolis the capital of the Persian Empire.
Drawing of the Great Palace built by Xerxes The Great Palace consisted of a grand hall that was eighty-two feet in length, with four columns.  This is the place that the nations would give tributes to the king.  There were two doors, one to the south which opened to the Apadana yard and the other opening onto a winding road to the east.  Around 515 BCE a grand stairway had begun up to the palace doors. When the stairwell was finished, the stairway was a master of symmetry and so grand and beautiful that only Persian royalty and nobles could ascend and descend from the stairwell.  Due to its location, Persepolis was mostly visited during the spring. So the Achaemenian Empire was administrated in the imperial cities of Susa, Babylon, and Eb. 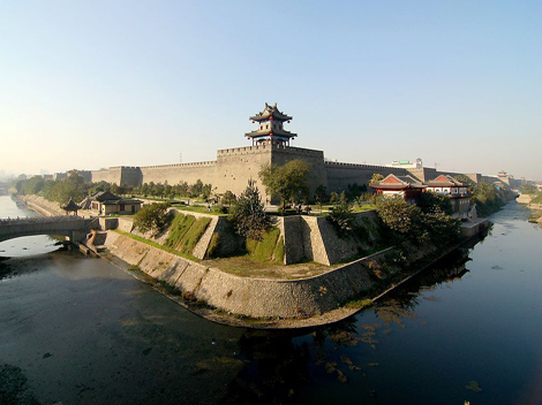 Xian City Wall
Chang'an was the capital of China for many  dynasties and is now known as Xian.  The city was built in a symmetrical format.  The streets laid out like a chess board and in an orderly inner  matter.  The design of the city influenced many other neighboring cities.  There were eastern and western markets in the ancient city.  The city had 11 south-north streets and 14 east-west streets.  All the roads were lined with neat rows of water drainage channels on both sides.  Canals in the ancient city help transport goods throughout the city.  The silk road had traveled through Chang'an  and many merchants were in and out of the city. 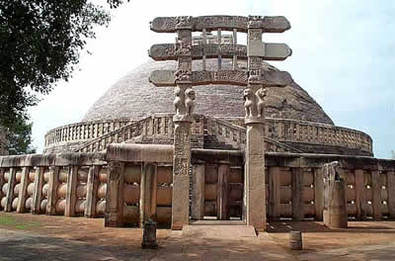 First Buddhist University
Pataliputra (now Patna) was the capital of the Mauryan Empire (326 - 184 BCE) and was the largest city in the world at that time. It was located where the Ganges and Son Rivers meet in northeastern India. Later it became a capital city again during the Gupta Empire (320 - 550 CE).  A wooden wall nine miles long and a mile and a half wide surrounded Pataliputra, with 470 towers and a moat that was 900 feet wide.  Hospitals were available in the city and the poor could get free treatment if needed.

The city of Athens in Greece was a famous Acropolis, or a complex built on a high hill.  Athens began small of a Mycenaen community and had great works on stone, such as many Greek sculptures that represent many of the Gods from Greek mythology.
As the soil in Classical Athens wasn't able to produce a large-scale agricultural society, Athens depended on trade, mostly by sea, like many cities of the time.
Athens is also well known for its role in Greek Mythology as a place of the Gods and riches.  Homers Iliads and Odyssey portray the people of Athens as great warriors.  The Athenians claimed for themselves a special status in that they spoke Ionian, Greek and held to customs they felt were superior to their neighbors.
Many of the wealthy aristocrats held control over the land and some of the government and this meant  that many of the more poor land owners were turned into slaves to pay off their debts. To address this problem the statesman Draco created a series of laws in around 621 BCE, but they were considered too severe because most of the penalties resulted in death.
Another event that changed Athens was the Peloponnesian War which had lasted between 431 BCE and 404 BCE between Athens and Sparta. This war ended in disaster for Athens after their defeat, which depleted the empire's wealth and the foundation of the city.  Not only had the city physically fallen, but the reputation of the city had fallen after its defeat to the Spartans.  Athens was no longer known as the great city of learning, creativity and learning of the Greek world, after their defeat.

Cathage was founded in 813 BCE by the Phoenician Queen Elissa, also and better known as Dido.  Carthage, was originally known as Kart-hadasht, which meant new city, and was named that to distinguish it from the older Phoenician city of Utica that was nearby.  The Greeks called the city Karchedon and the Romans turned the name into Carthago.  The city was originally just a port on the coast for Phoenician traders to re-supply or repair ships, but later became one of the most powerful and richest cities of the Mediterranean region, of the time.
After the fall of another Phoenician city, Tyre by Alexander the Great, many of the citizens had fled to the city of Carthage.  Since many of the lives that Alexander had spared were those that were wealthy enough to buy their lives, had established the city of Carthage and made it the new center of Phoenician trade.  For the city that had started off as a small port, it grew and grew gaining more and more miles of land.  Even before 100 years had passed, the city had become the richest city in the Mediterranean.  The aristocrats lived in palaces, attractive homes, while tribute and tariffs regularly increased the city’s wealth. The harbour had 220 docks, gleaming columns which rose around it in a half-circle, and also had many Greek Sculptures around the area. The Carthaginian trading ships sailed all around the Mediterranean Sea while their navy, which was the supreme in the region, kept the city safe and, also, opened new territories for trade and resources.

Throughout Ancient Rome, the city contained a lot of Greek culture.  The Ancient Roman world left a legacy on the Greek world. The Romans created  new architectural structures such as the basilica, triumphal arch, monumental, aqueduct, amphitheater, granary buildings, and residential housing blocks.  Columns were still used, only to add a traditional looks to structures.  It is also evident that there was a lot of Greek tradition added to the buildings of Ancient Rome.  Some of the most famous column structures throughout the city are the Doric, Ionic, and Corinthian (pictures provided below in slideshow).
According to Greek legend, Rome was formed by two brothers, demi-gods Romulus and Remus, on 21 April 753.  Rome was originally a small town around the banks of the Tiber River.  Rome had grew early on by size and strength due to the strong trade.  The location of the city made it easy for merchants to find and use waterways to sell their goods.
The Greek culture and civilization had provided a way of life to live by for the Romans.  The Romans did indeed follow the Greek traditions and based their own culture after the Greeks.  The Romans had borrowed literacy, religion and the fundamental of architecture from the Greek culture.  The Romans also had a Roman Republic government.
Like every good empire, the Rome empire did eventually fall.   Some say that the Roman empire had collapsed within itself, but nonetheless the Roman empire had fallen due to the political differences, economic difficulties, and between the different classes of ancient Rome, (The ruling class and  the lower classes).