In 589, the short-lived Sui dynasty came to power. In 618, the Tang dynasty came back to power, as shown in the first map in the slideshow. The empire was greatly expanded at this point, and the Tang dynasty brought great stability to China. Taizong, who ruled 624-649, set the stage for the empress Wu (long regarded one of China's greatest rulers) to take over. She began only as a concubine, then became wife of the emperor, and finally took over power in 690. Her son, Xuanzong, brought China to its highest point in history so far. However, after Xuanzong fell in love with a concubine, he neglected his duties. The execution of this concubine is explored in detail under section A. It was forced by the general An Lushan, who rebelled until 763. After this, the Tang dynasty went downhill and collapsed in 907.

By 969, the Song dynasty was in place and China was back together. There are two nomadic dynasties in the north at this point: Xia and Liao. However, in 1135, the Jurchen invaded China and created the large and powerful Jin dynasty. The now "Southern Song" dynasty inherited the most densely populated parts of China, so it was still more powerful in comparison. Internal policies also changed, stabilizing the government by introducing the examination system.

Then there were the Mongols. Those dudes were crazy. The Mongols conquered all of China within the 13th century. Kublai Khan ruled China in essentially the same way as before, with Mongols in place of head advisors. After the 1330s, however, China began to rebel and eventually put in place the Ming dynasty. Minimal damage came to China during this time. China began to expand steadily with the building of the Great Wall and stable economics.

Economic stability was brought back to China with the return of the Tang dynasty. The later Song dynasty also had a huge economic growth and commercial expansion. Paper money was introduced, and China's economy skyrocketed. Later, after the Ming dynasty came to power, China's economy remained generally steady.

China generally maintained its Confucian values during this time period. Even the invading Mongols didn't care much about religion, so China's religion maintained a steady course. Buddhist influences from the south were also prominent (especially among women) so this was another prominent religion in China. This is because the Empress Wu took over, and during this period, women could enjoy more freedom (including religion). Buddhism appealed to women because it had less restrictions than Confucianism. However, China experienced a setback in gender equality and a rise in Confucianism after the fall of the Tang dynasty.

While Chinese culture flourished for about 250 years, after the revolt of An Lushan and the fall of Xuanzang, China fragmented. Court life and culture did not advance much in this time, with factionalism causing major disagreements. Gender relations were exceptional in comparison to other times during the Tang dynasty (especially the rule of Empress Wu). Afterwards, however, social equality declined with the rise again of Confucianism.

The rule of Xuanzong from 712 to 756 was a golden age in China, particularly for poetry. Afterwards and until the collapse of the Tang dynasty in 907, there were many less innovations. The 10th and 11th centuries contained an agricultural revolution, as wet-rice cultivation increased crop yields. Printing, gunpowder, shipbuilding, porcelain, paper money, and the compass all saw great advances or first approved during this time period. The examination system appeared for electing officials.

The arts thrived after the son of Empress Wu, Xuanzong, took over. However, he soon neglected his duties, paying more attention to a concubine (Yang Guifei). This painting depicts his flight after, in 755, Xuanzang was forced to flee from the capital by a powerful general, An Lushan. 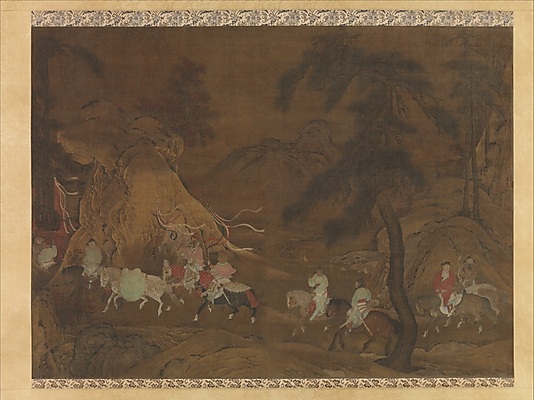 The Tang dynasty pushed the borders of China forward after taking over in 618. However, An Lushan, a powerful general, caused the borders to shrink near the end of Xuanzang's reign and until the collapse of the Tang Dynasty in 907. China was then reunified in 969 under the Song dynasty. In 1135, the Jin dynasty took over northern China.
Emperor Xuanzong's Flight to Shu. ~1150. Hanging scroll; ink, color, and gold on silk. The Metropolitan Museum of Art, n.p.