The Achaemenid Empire, from 550 BC to 330 BC, was founded by Cyrus the Great. He became king of Persis in 559 BC, defeating the overlord Astyages of Media in 550. The capital was Pasargadae, founded on the site where this overlord was defeated. Cyrus' son, Cambyses, succeeded him, conquering Egypt in 525. The next ruler was Darius. He founded Persepolis and created a palace in Susa. With the rule of Xerxes, Darius' son, expansion finally ended. He stabilized the empire after launching unsuccessful attacks against the Greeks. The empire remained the most powerful in the world at the time, from 465-404. After the death of Darius II, who ruled from 423 to 404, there was war between Atraxerxes II Mnemon (the successor of Xerxes and predecessor of Darius II) and his younger brother Cyrus. When Greece defeated Cyrus' army in Cunaxa, the Achaemenids seemed weak-- but they persevered and later regained a hold on the smaller Greek city-states.

In Egypt, Amyrtaeus conquered and managed to hold off the Persians for a while. Finally, during Atraxerxes III Ochus' reign (358-338), the last pharaoh of Egypt fled and it was reconquered.

Atraxerxes IV Arses succeeded Atraxerxes III Ochus for a brief period, before being replaced by Darius III Codomannus. While he was busy putting down revolts, Alexander the Great invaded and defeated Darius at Issus in 333. In 330, Darius was murdered and Alexander began his 7-year unsuccessful reign. After his death, the empire dissolved into three parts. 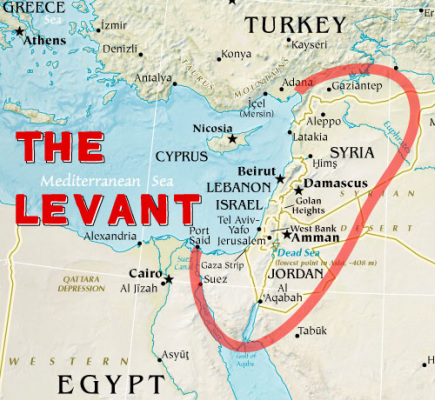 In the mid-3rd century BC, Arsacid I conquered the Parthia region and founded the Parthian Empire. Mithridates I (r. c. 171–138 BC) seized Media and Mesopotamia from the Seleucids, which greatly expanded the empire. At its height, it stretched from what is now eastern Turkey to eastern Iran. It was, at the time, a large center of trade due to the fact the the Silk Road was just beginning to flourish. The Han dynasty in China was creating more and more silk, and the Middle East wanted a piece of the action.

West of the Parthian Empire were the Seleucids, who were enemies to the Parthian Empire. They weren't the only ones, however-- the Scythians in the east also had quarrels with the Parthians. Between about 50 and 0 BC, as the Parthians continued their expansion westward toward the Mediterranean Ocean, they came to the Kingdom of Armenia. This would become the battleground for their conflict with the Roman Republic. Finally, in 40-39 BC, The Levant (pictured) was captured.

There was, however, a counterattack that would lead to their downfall. It was led by Mark Antony, and during this time period, several Roman emperors invaded. These were known as the Roman-Parthian Wars. Time and time again, Seleucia and Ctesiphon were captured. The straw that broke the camel's back was civil war. The Parthian Empire was weakened and, in 224, its last emperor was overthrown by Ardashir I. He went on to establish the Sassanid Empire.

Greek culture was prominent for the first half of the Parthian Empire's existence, but it also strongly held its Persian roots (which won out in the end). There are not many textual records of the time period, so lots of the history is found through art.

The capital of the Sassanid Empire was established at Ctesiphon. It roughly stayed within the bounds of the Achaemenid empire. The Greek cultural influence that was so popular during the Parthian Empire was stamped out, as the Sassanid Empire placed heavy influence on Iranian culture. It was a successful empire, stabilizing and producing several technological improvements. The empire, like the previous one, was ruled by a single King of Kings (shahanshah). He, in turn, ruled several smaller kings that controlled different parts of the empire. The social system is comparable to the caste system in India: they were divided into four social levels. The priests were at the top, then there were warriors, secretaries, and commoners. The religion prominent at the time was Zoroastrianism.

Rome was still an enemy, and they frequently battled. Between 240 and 270, Shahpur I captured much Roman territory, even kidnapping the emporer. Shapur II (ruled 309-379 CE) was also very successful in his campaigns against the Romans. Khosro I (531-579 CE), also known as Anushirvan the Just, was the most successful and well-known ruler of the Sassanid Empire. He was tolerant of all religions.

In contrast to his predecessor, Khosro II was wasteful with his wealth. He did, however, have some initial success against the Romans. In later years, the Romans and Sassanids became tired of battling, depleting each other's resources. However, it was too late: the Sassanid Empire crumbled and dissolved into several smaller states.